REsource: The Splendour of an Autumn Moon
The Devotional Verse of Tsongkhapa 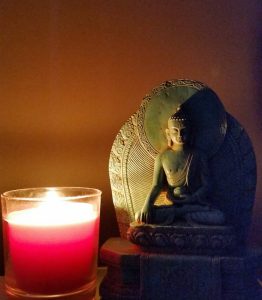 ndra, king of the gods,
his enemy the Asura leader,
Pramudita, celestial musician king,
naga kings and great rishis
beautify your lotus feet with the jewels of their crowns.

Glorious body bathing in splendour of its golden glow,
voice unrivalled even by melodies of celestial music,
mind brighter than ten million suns,
guide supreme for infinite living beings,
paragon of the Shakyas.

Moon and stars on a cloudless night
appear crystal-clear in the midst of a lake,
so in the clear waters of my untroubled mind
are your qualities reflected one by one.

Fingertips fold at my heart like a lotus touched by moonlight,
single-pointedly I hold you before me.
you of great compassion heed this modest praise.

Ringed by noble bodhisattvas
as the moon is circled by stars,
leading your arhat entourage
as the mighty bull leads the herd,
the skies were filled with a million garlands of golden light
as you soared through the sky
to arrive like the king of swans
in a magical display of corporal power.

At that time thousands of gods and men beheld your face,
awakened by seeds of wholesome deeds stored over ages,
their untamed minds at once loosened
from the chains of countless faults.

Under your Bodhi tree, great warrior,
like a violent wind in a dark storm
you overwhelmed Mara’s hosts
with an army of compassion and wisdom.
Without weapon, without armour,
you routed uaided a million demons.
Other than you, who could fight such battles?

With the fire of love
you scorched the hearts of lustful gods,
while remaining to all a jewel of compassion
without favour or displeasure,
unceasing, even momentarily, in your work for others,
who are unceasing likewise in praise of your qualities.

Mind as deep as ocean,
word resounding like the celestial drum,
body taller even than Meru,
you are meaningful to see, hear, or bring to mind.
Were every living being of every world
to raise simultaneously individual doubts,
in front of each would you simultaneously display
as many creations of body and of word,
and yet you would not have stirred.
Such mysteries of body, speech and mind
are not in the experience of bodhisattvas,
hearers, and solitary practitioners, however they try.
What need to mention Brhma, Indra, and others?

The mighty garuda hawk wings its way
onward, onward through the skies
but on tiring turns and heads for home.
The skies, however, lie unhindered by such limitation.
To talk of your qualities is likewise.

Like a tiny bird yearning to follow the path
travelled by the mighty garuda
in whom the art of flight is perfected,
I long to travel that great highway
to the throne of the ten powers,
but my mind’s eye is of sight too weak
to see the reality of phenomena.
I am impoverished, moreover,
by the lack of bodhi mind and true renunciation,
persecuted constantly by enemy-like delusions of mind,
cast headlong into the pit of grasping to self.
Were I abandoned by you in such wretched state,
what other guardian who gazes on the pitiful
with such tremendous love could I turn to for refuge?
When this realm, sullied by the five remains,
was ignored by others but adopted by you,
what need was there for buddhas and bodhisattvas
to praise and liken you to the white lotus?

Within your deeds however,
No trace of neglect or indifference
toward any disciple is found.
Solely by my own faults, therefore,
am I rendered so unfortunate,
and no failing in attached to you.

Therefore, until under the bodhi tree
I emerge victorious over the hosts of Mara,
I pray to be cared for life after life by you
and never tire of your nectar-like words.