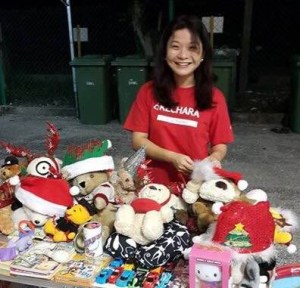 I have known H.E. the 25th Tsem Rinpoche for more than 10 years. During this time, I have seen how the many things that we have in Kechara today were born, from a single idea into fruition. One such idea that bore the sweetest fruit is Kechara Soup Kitchen.

I first heard the slogan “Hunger Knows No Barriers” in 2007. It happened during an audience with Rinpoche while we discussed how we could better serve society. Kechara was just a small Buddhist organisation at that time, with no big achievements or experience in running a charitable cause. Regardless, the thought that we were about to embark on something that has always been and still is very close to Rinpoche’s heart – caring for the homeless and less fortunate – was a huge motivator for many of us. I witnessed history in the making when this tagline was conceptualised by Rinpoche and on that very same night, we bought 20 packets of food to give to the homeless on the streets, with the thought that “May we be able to do more for them in the near future.”

Having a permanent soup kitchen to contribute back to society has always been one of Rinpoche’s dreams. From when he grew up and lived in USA, the wish to start a soup kitchen became even stronger after Rinpoche was homeless for a period of time in his teenage years. Rinpoche knew first-hand what it felt like living on the streets, having little hope and experiencing constant hunger as he had a childhood very different from what you would expect of one who came from a first world country. With each passing day, Rinpoche’s survival on the streets was almost a miracle as he desperately looked for food to drown out the loud grumbles of his stomach. And even when Rinpoche got some, very often it would instead go into the stomach of a stray dog. Safety, food and shelter are the most basic needs of any living being, thus one can only imagine the insecurities that homelessness can bring. Without these basic needs fulfilled, it is incredibly difficult for a homeless person to change his or her state of homelessness without assistance. With this knowledge in mind through Rinpoche’s own experience of homelessness, Kechara Soup Kitchen’s vision of “Taking the homeless off the streets” by providing them a helping hand to integrate back into society was crystallised. 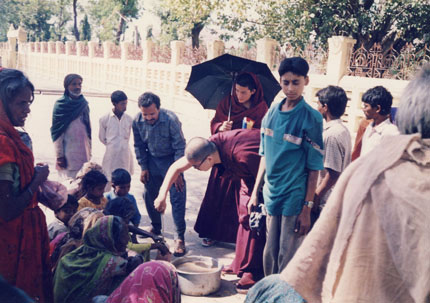 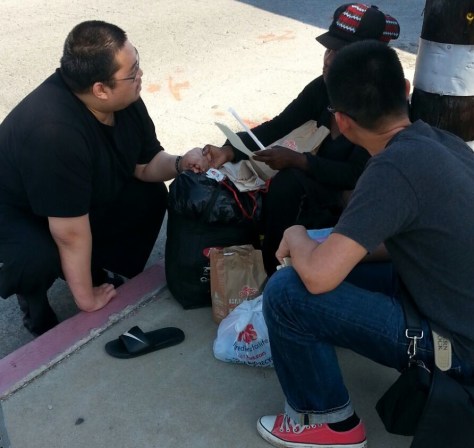 Over the years, we learned a lot about the homeless from Rinpoche. Rinpoche taught us about their psyche, feelings, needs and wants, which are very important to understand especially since KSK is serving and helping these homeless individuals. Rinpoche would know where they would shy themselves away from society, and it was Rinpoche who would often spot them during our countless journeys around town. On many occasions before Kechara Soup Kitchen was founded, when Rinpoche would take us down to the streets of Kuala Lumpur to feed those who had nothing. I used to be amazed at how Rinpoche could spot a homeless person from afar, as I would not be able to. It was only later when Rinpoche explained that everything stems from care that I learned. It is when you care, you will notice others. 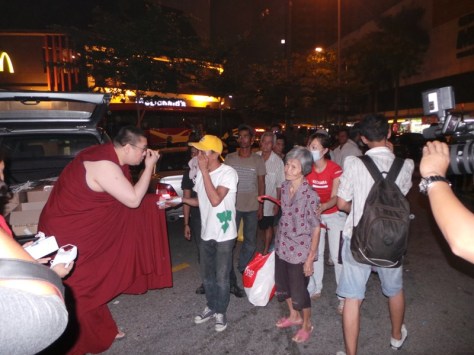 You may ask why is there no barriers to hunger? Rinpoche explained that if you were to x-ray an empty stomach, it will not differentiate the religion, gender, race, ethnicity or give any ‘labels’ to the person whose stomach it is. An empty stomach is just an empty stomach, regardless of who you are. So we feed and serve with no boundaries, and from the food we provide, it will at the very least give them hope and comfort that there are people who are reaching out to help them stand on their feet again, just as Rinpoche was able to. 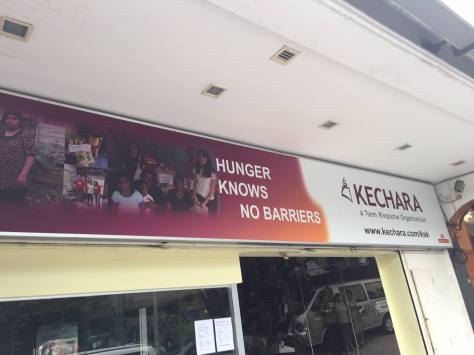 What first began with 20 packets of hot food and a teaching to students on empathising with the difficulties of the less fortunate has grown into a charitable cause that has made a tremendous difference in people’s lives. Inspired by Rinpoche’s vision to help the homeless, Kechara Soup Kitchen has not only set up a permanent soup kitchen building in Kuala Lumpur, but also spread its helping hands to the homeless in several states in Malaysia as well as Jakarta, Indonesia! While KSK has grown tremendously in the past few years, we will continue to improve and expand so that we will be able to serve our homeless clients better, by improving their quality of life.