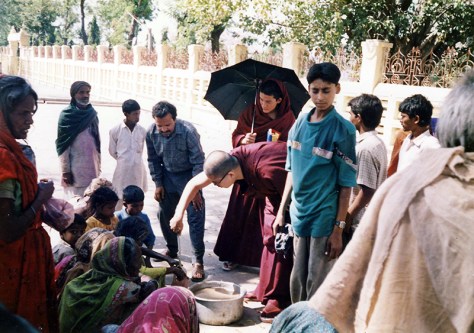 “Everyday, try to help at least one person.”

Regardless of where Rinpoche is, he will always find somebody to help. In the photo above, Rinpoche was distributing food to the poor of Bodhgaya, India. Later on, Rinpoche would say that his experiences as a homeless teenager in the US, and his time in the monastery in India inspired him to set up Kechara Soup Kitchen to feed the hungry and destitute. Many years later, on another pilgrimage to Bodhgaya, Rinpoche was walking towards the stupa when a voice called out, “Rinpoche! Rinpoche!” It transpired that a rickshaw driver Rinpoche had befriended many years ago whilst on pilgrimage there, recognised Rinpoche’s voice from a distance. So in the middle of the night, Rinpoche paid a visit to the rickshaw driver’s home. As usual Rinpoche did not go empty-handed. He brought with him new winter clothes, bedding, blankets as well as many kilograms of rice, vegetables, sugar, salt and cooking oil. Rinpoche has been consistently assisting the underprivileged even at a time when he himself did not have very much. In Gaden Monastery, Rinpoche was well known to visit elderly Tibetan laypeople who were without families, to bring them food, gifts and spend some time with them. Rinpoche also raised funds for various social welfare initiatives, for example the Gaden Shartse Clinic as well as this community hall and nursery school in the local Tibetan refugee settlement who erected a sign as a token of appreciation for Rinpoche’s assistance.

All of this took place alongside Rinpoche’s fund-raising for the monastery which included funds to build new accommodation for Phukhang Khangtsen, install water pumps for the monks, and install a new floor for their prayer hall as well as their debate courtyard. Through it all, Rinpoche also continued to provide medical care for sick senior monks, and raise funds for the monastery’s kitchens to ensure the monks were receiving adequate nutrition. In Malaysia, Rinpoche established Kechara Soup Kitchen which is dedicated to providing food and assistance to Malaysia’s homeless and urban poor. Having lived in Malaysia on an on-and-off basis for over 20 years, Rinpoche wanted to repay the kindness of Malaysians by contributing back to Malaysian society. Thus Kechara Soup Kitchen was born, to serve all Malaysians regardless of their race, religion, gender or creed. 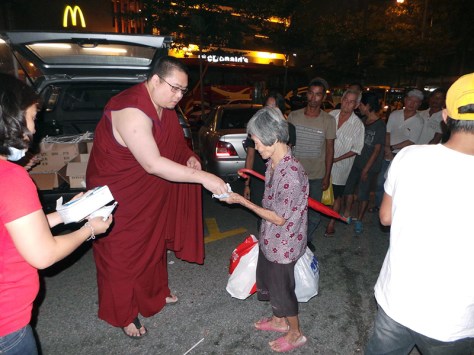 Rinpoche’s activities remain consistent wherever he goes. Whether in America, India or Malaysia, Rinpoche’s car will always carry food, water and clothes for the homeless and hungry. Rinpoche also carries with him cans of dog food, bowls and natural hide bones to feed hungry strays. It is not uncommon for Rinpoche’s car to pull over onto the side of the road, and for Rinpoche’s attendants to come running out to feed a stray! From his actions, many of Rinpoche’s students have been inspired to do the same.

When it comes to developing compassion through action, we need only look at Rinpoche’s example to learn how to focus out. 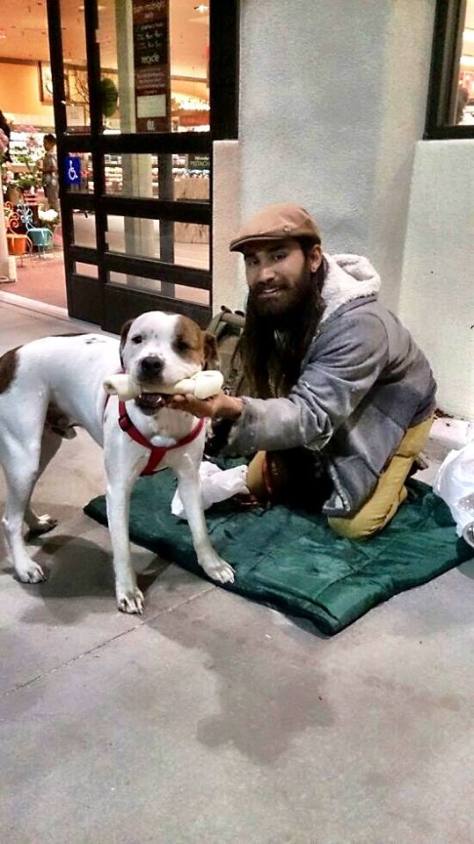 Please support us so that we can continue to bring you more Dharma:

If you are in the United States, please note that your offerings and contributions are tax deductible. ~ the tsemrinpoche.com blog team