Prince Gautama Siddhartha, after assuming an ascetic life, first went to Malla (present day Uttar Pradesh in India) and resided for seven days in the mango grove named Anupiyabelonging to the princes of Malla. On the seventh day, he went towards Rajagaha (present day Rajgir in the Nalanda District, in the State of Bihar, India) which was the capital of Magadhawhere King Bimbisara ruled, begging alms. Seeing the imposing posture of the ascetic, the people of Rajagahainformed the king of the new comer. King Bimbisara, after questioning found out the true identity of the ascetic and offered his kingdom. Declining the offer with compassion, Ascetic Gautama promised to make his first visit to Rajagahaafter the Enlightenment.

Resuming his journey, Ascetic Gautama went first to Alara Kalama and then to Uddakaramapuththa for guidance. They were the most eminent intellectuals at the time.

He learnt everything that they were able to teach and became proficient in concentration (samatha) meditation. But, Ascetic Gautama was not satisfied and he knew that their teachings were not enough and would not give the ultimate solution of eliminating the suffering. Despite the request by both sages to take over their institutions after them, Ascetic Gautama left seeking the Eternal Bliss, ‘Nirvana’.

He was wandering in searching for a place to practice his ascetic life when he came to the peaceful Uruvela Senanigama (present day where the Bodhgaya Thai temple is situated, in the State of Bihar). 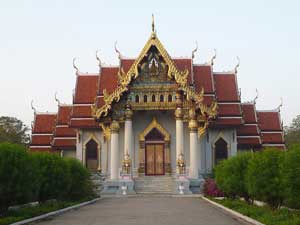 The place was ideal for an ascetic life since it was a flat area with a forest of lush greenery and the clear waters of river Neranjana flowing through it providing shelter and a bathing spot. In the vicinity, not too far or too near, were villages with peaceful folk to whom an ascetic could go for alms. The five ascetics (Kondanna, Bhaddiya, Wappa, Mahanama, Assaji), who were the sons of the Brahmins, who named Prince Siddhartha too joined him. It is said that they had been brought up in the palace itself and King Suddhodhana sent them to join his son to protect him and care for him. Here, Ascetic Gautama practiced asceticism to the extreme for six years, starving himself to the highest degree. His flesh dissolved and only the skin was left to cover the bone structure.

When six years of self-starvation didn’t bring the Enlightenment, Ascetic Gautama resorted to the ‘Middle path’ (neither attaching oneself to sensual pleasures nor give excessive agony to the body). He followed this ‘path’ the rest of his life and taught others to do so too.

The five ascetics became disappointed by Ascetic Gautama’s decision and left him. They were sure that he would not attain the Enlightenment as expected by following in this new direction. They left to the Deer Park at Isipathana in Benares(Present day Saranath at Varanasi on the Western Banks of river Ganges in Uttar Pradesh, India).

Near the river Neranjana, there was a banyan tree famously known as ‘Ajapala’. The villagers came here to worship the god of the tree. It was suppose to be a very miraculous tree. On the day that Ascetic Gautama sat under this tree meditating, a young woman named Sujatha came to fulfill a vow with specially made milk rice in a golden bowl. Mistaking the Ascetic to be the god of the tree, she offered the milk rice with great reverence. This was Ascetic Gautama’s last meal before the Enlightenment and seven weeks of contemplation after that. After partaking the meal, Ascetic Gautama, threw the empty bowl on to the middle of the river saying that if he attains Buddha hood that day, let the bowl go upstream, if not, let it go down stream. The bowl went upstream. 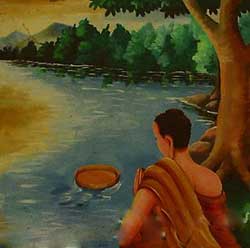 He went to Gaya (Present day Bodhgaya, Gaya District, Bihar, India) looking for a suitable place to start meditation. He found a ‘peepul’ tree (Ficus Religiosa which was native to South Asia and belonged to the fig/mulberry family). He sat under it cross legged with his back to the tree and made a firm resolution not to get up until he attained the Enlightenment. 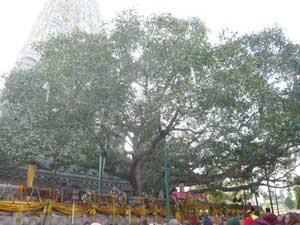 It was the eve of the Wesak Full moon day. The Ascetic Gautama started the ‘Anapanasati’ (Breathing) meditation. 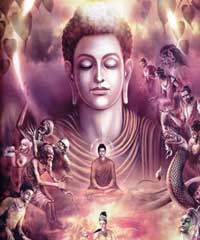 During the first part of the night, the evil one (Mara) came with his army to defeat the Ascetic’s objective by frightening him and when they were unable to do so, sent his three daughters to lure the Ascetic. (Some say that it was not beings who came to fight him, but his own evil thoughts of desire, craving, attachment & fear which crept into his mind.) But, Ascetic Gautama’s strong determination beat them all.

He found the power of seeing his past lives as the first step to Enlightenment. (pubbe -nivāsanussati Gnana)

In the second part of the night, Ascetic Gautama realized the impermanence of life. How the karmic effects of a being takes him through the ‘Life – Death Cycle’ (Samsara) over and over again.

He found the power of seeing everything from all sides and distances. (dibba-cakkhu Gnana)

In the third part of the night, Ascetic Gautama realized the Four Noble Truths and found the power of extinction of all mental intoxicants. (āsavakkhaya Gnana)

Thus, attaining The Enlightenment (The Buddha hood) on the Wesak Full Moon day!