I came across something very interesting. There are many methods to the divine, or finding God or connecting to a sacred heaven since the beginning of time. As trends change, so do worship. The Hindu faith has over 1.2 billion adherents in the world and it is over 5,000 years of continuous practice. Hinduism has many sects and sub-sects also. In India and all over the world Hinduism is accepted as a mainstream religion and it’s a profound path.

We cannot judge what is correct or not. We cannot condemn another person’s faith or method to God or reaching Godhood. Everyone has their rights to worship or not worship as they like. No one should criticize anyone else’s religion no matter how different, ‘strange’ or unfamiliar it can be to you. So we cannot criticize anyone’s religion or restrict their rights to freedom of worship. Especially religious leaders of any religion should never criticize another person’s religion, discourage or degrade. We need world peace and harmony. Religion can be a vehicle of peace or destruction depending who wields this dangerous power.

Dorje Shugden practitioners do not make animal sacrifices, eat human corpses, become intoxicated as part of the rites, be nude in public, sit on top of corpses to meditate, drink animal urine or eat their feces. They do not eat rotting food, make offerings of human sacrifices to Shakti (Female divine power as embodied by Kali), smear ashes of burnt human corpses on their bodies. I am not saying good or bad to these practices.  I am simply stating Dorje Shugden practitioners do not engage in similar rituals or even remotely similar. Many places unfamiliar with Indian religious culture would find these practices perhaps too difficult to understand? Dorje Shugden practitioners are taught to develop compassion, offer vegetarian foods (where possible), meditate on Lam Rim or mind transformation teachings, be good human beings, give charity, take refuge in the Three Jewels, have guru devotion, do their Dharma studies and apply and achieve the enlightenment of Lord Buddha to be of benefit to all sentient beings. Yet they are not allowed their religious freedom in India as sanctioned by the Tibetan Leadership within their own Tibetan communities.

The democratic Government of India protects all religions but within this the Tibetan leadership creates religious differences leading to discrimination, violence, hatred and bias against Shugden practitioners. They call Dorje Shugden a demon and his practitioners followers of the devil.  Why is there a ban against Shugden where its practice is much more milder than the Aghori faith in their expression of worship? Many cultures would even see Shakti or Shiva in his terrific form as demonic and far from being God.  If India allows Aghori why not Shugden faith? But then it’s not India that bans Shugden. But there is loophole. India gives Tibetans a sort of autonomy within India which Tibetan leadership exploit this loophole by banning worship of Dorje Shugden for political reasons. If a Tibetan started practicing the Aghori sect of Hinduism, how would the Tibetan leadership accept this? Would Shiva or Shakti requiring blood and human flesh to be eaten be considered a Buddha? If Shiva or Shakti is not a Buddha would their practice be banned? Why or why not? Tibetan leadership doesn’t consider Dorje Shugden a Buddha and needs to be banned. If Shiva/Shakti is banned, then is that based on religious freedom or protecting their people from the big bad “demon”? Which one is it? Are you going to interfere with people’s religion and ban religions or give full religious freedom? You cannot give religious freedom and then publicly discourage people from it.  Religious freedom or protecting their people from the practice of non-Buddhas as in the case of Shiva/Shakti?  Amidst practices such as the Aghori sect which is accepted (which it should be), the ‘requirements’ for Shugden practice is more ’easier to accept’ and benign in its expression to the general populace and there is nothing that can be seen as extreme. So again, why is Aghori accepted and not Shugden practice? If the Tibetan leadership dare make comments about Aghori or any sect of Hinduism, they would have huge protests and they know it. Because they don’t allow religious freedom and they know it. They do their best to cover this fact. Any genuine democracy and their leaders NEVER criticize any religion even actual devil worshipers such as Satan believers. I am not advocating or not advocating any worship, just making a statement that religious worship should be allowed in any form and no government or leader should ban/criticize or interfere.

Aghori derives from the Sanskrit word “Aghor” which means absence of darkness. Aghor implies natural state of consciousness where the mind is free of fear and repulsion. It is to achieve rising above what we fear and what we attach the ego to. If one is fearless, then one does not discriminate or damage. Aghori sect of Hinduism engages in all these practices that some in different parts of the world may find difficult to grasp or repulsive. But as I said, the road to the divine is not one single road map, but many types and we have to respect. This sect is constitutionally protected in India and also no one calls them slanderous names, degrades them or calls them vulgarities because of their practices and methods to God or enlightenment.

Some basic information on Aghori practices and *sadhus:

1. The sadhus will eat leftovers from human corpses as part of their ritual.

3. The ashes of human corpses are smeared on their body regularly.

4. They are followers of God. They believe in God. God is whom they call Shiva which this sect dates back as beginning in the 5th century. They also worship God in the female form or Shakti which is Kali.

5. They must disconnect from family after being ordained as a sadhu and never ever return to the village of their birth again. Families and responsibilities are thought to be a hindrance to spiritual enlightenment.

6. Hindus cremate the bodies of the dead in special places called charnel grounds. Aghori sadhus must live only in charnel grounds their whole lives to be free of attachment to pleasure and comfort.

8. One has to practice meditation under a guru’s direct guidance for minimum 12 years to enhance one’s spiritual advancements.

9. Aghori sadhus use wood from funeral pyres to produce fire for their needs. They dress themselves in clothes taken from dead bodies.

10. To be initiated into sadhu-hood, one must find a guru and follow him precisely in all instructions. Find a human skull (kapala) and use this as a food bowl. Must smear ashes of cremated corpses on their bodies during meditation. You have to during certain rituals eat rotting human flesh and meditate while sitting on a human corpse. This symbolizes no fear and eliminating all attachments to form, taste, touch, sight, smell and phenomena in order to ascend to God. To become one with Shiva. To become enlightened.

11. There are many Aghori sadhus that wander their whole lives in complete nudity to free themselves from illusions. This is to transcend human feelings of hatred, love, jealousy and pride.

12. Daily they eat rotten food and leftovers found in garbage dumps or dumpsters. Also to eat animal feces and animal urine in their diet.

13. They believe God exists everywhere whether it’s in cow dung or all foods. Therefore nothing is unholy, unclean and or inauspicious. Everything is sacred because everything is infused with God’s energy. They wish to blur the lines of holy and unholy, good and bad to transcend normal ordinary human likes and dislikes in order to achieve enlightenment.

14. They roam freely without worry of community, food, family and they sleep in any charnel ground they come across at night. Their sleeping places or any semblance of resting area must be a place where corpses are cremated. They must only partake food and drink through a human skull or kapala.

15. They also partake of smoke and alcohol which differentiates them from other Hindu sects. To be imbibed or intoxicated is another way of disconnecting from ordinary mundane views.

These are some basic tenants, rules and beliefs of this Aghori sect of Hinduism. I am sure there is much more depth, meaning and symbolism to this faith for those who wish to study further as you can search on line. I don’t think we should conclude any religion or faith or spiritual path from the external practices/symbolism that may greatly differ than our own. India is a great and ancient nation with many forms of religion for thousands of years. We cannot ‘judge’ their methods to God or enlightenment based on the criteria we learned from our own culture. What is acceptable and not acceptable culturally is vastly different. No culture is better than another. A culture whether secular or spiritual is unique and must be seen from their perspective and not ours. Social norms, acceptability, religion develop to suit the people over time of a particular region. After all, in the end who is to say which way is correct or not correct. But one thing for sure, all leaders both secular and spiritual must always grant religious freedom and never create division based on religion. This is necessary for peace in the family, neighborhood, community, town, province, state, countries and the world. We need to present religion in a way that creates harmony and mutual respect.

Or view the video on the server at:
http://video.tsemtulku.com/videos/aghori.flv 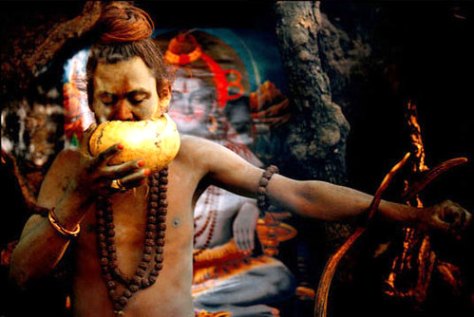 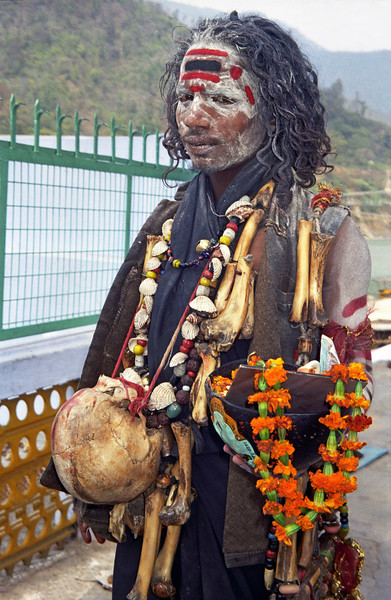 Aghori sadhu on the move with his bone ornaments, human skull and smeared ashes from a cremated human corpse on his face and body. These are the requirements of this sect of Hinduism. 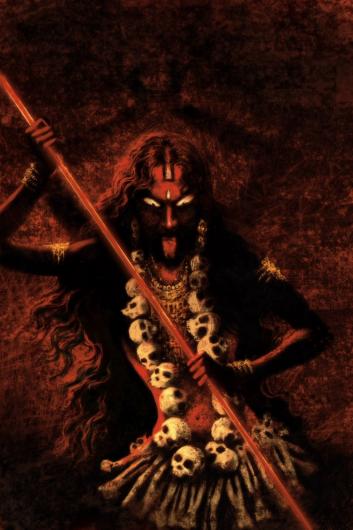 Shakti or the female form of God. 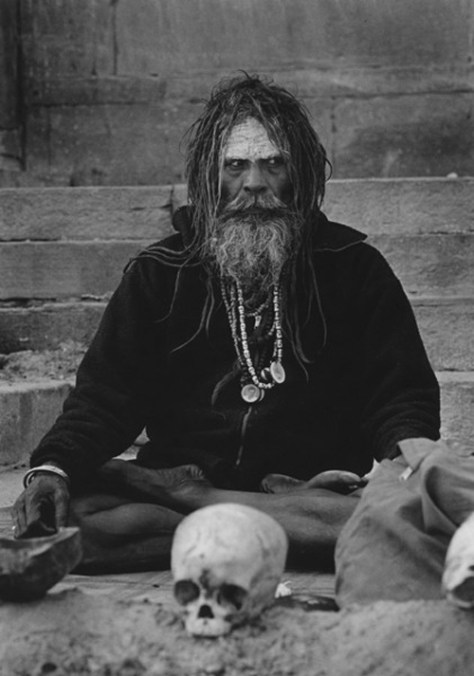 Aghori sadhu who are widely feared and respected and considered very powerful. 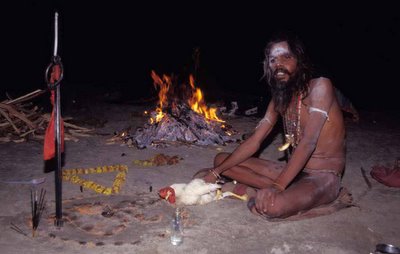 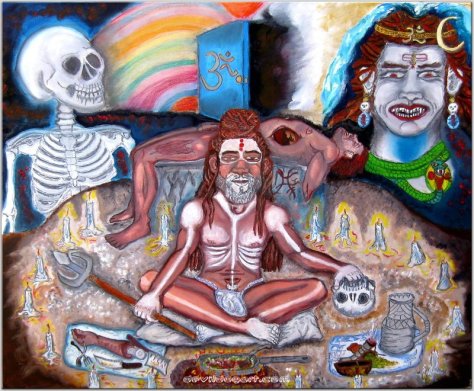 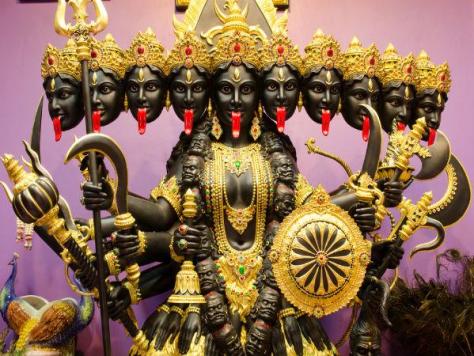 Shakti requires blood and she is the female form of God. God is genderless. We ascribe gender to God. So therefore God can manifest as male or female, benign or ferocious, fearsome or gentle. God has no borders and barriers.

Invoking Shakti in charnel ground during ritual by Aghori sadhu. 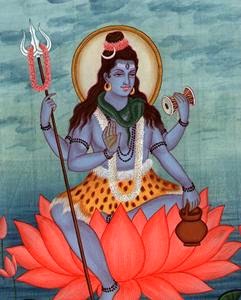 Aghori dedicate their practice, devotions and worship to God who is personified by Shiva. Shiva is the universal divine. And they believe God or Shiva is everywhere and in everything. Their goal is to merge with God Shiva and become one and enlightened. They can also do the same with Shakti, or female personification of God.

I offer this post with no offence to anyone especially the Hindus. If there are mistakes in this, I ask for profound forgiveness of my Hindu brothers and sisters. The methods, rites and worship of the vast and profound Hindu faith is not something I fully fathom nor understand. I as any ignorant observer from another culture can only share the superficial elements of this sect of Hinduism. I offer my profound and deepest respect to all aspects of Hinduism, their teachers and adherents.