Dear friends around the world,

People with clairvoyance when they come across a formless being, they can tell immediately if the being is good or negative. This does not change. It does not make sense the Dalai Lama saw Dorje Shugden as a very high being in Dungkar Monastery and then later in 1996 suddenly he said Dorje Shugden is not good and then institute the ban against Dorje Shugden? That would mean Domo Geshe Rinpoche who is highly realized is wrong too and for many incarnations wrong also? And hundreds of other highly realized practitioners are wrong also for 400 years? How could Dorje Shugden have fooled so many for so long until 1996? Does not make sense at all. Domo Geshe Rinpoche worshipped Dorje Shugden for many incarnations. His incarnations never went wrong or to the three lower realms, but returns again and again. This clearly proves Dorje Shugden’s practice does not send us to the three lower realms. How can Dorje Shugden be a superior being when His Holiness was younger and then later became a malevolent being needing a ban against his worship? Not logical.

By the Supreme Victor, the Great 14th Dalai Lama

Glory of the wisdom, compassion and power of infinite Buddhas
Miraculously powerful protector of Manjusri Tsongkhapa’s Teachings
Arisen as a lord of all wrathful worldly hosts
Come from the abodes of Tushita, Kechara (Paradise or pure land), and so forth!

Prostrating with devotion of body, speech, and mind
I confess all mistakes and faults in which
Out of delusion, I have contradicted your holy mind:
Accept with forbearance and show your smiling face!

Arising from the sport of non-dual bliss and void
Are offerings and torma of flesh and blood heaped like a mountain
First portions of milk, yogurt, beer and tea swirling like the ocean
Auspicious signs and substances and various animals
Peaceful and wrathful ornaments, enemy-destroying weapons and armor
Amassed samaya substances, outer, inner, and secret, without exception!

Having fulfilled your heart commitment and purified degeneration
By making these actually arranged and visualized offerings
Increase Lozang the Victorious One’s Teachings
And the life span and activities of the Teachings’ upholders!
Further the happiness of beings in the Gaden [Podrang] dominion!

Especially pacify all harm to us, the yogis and entourages
That arises because of previous karma and immediate conditions
And spontaneously accomplish, just as we wish
All good things, both spiritual and temporal!

Grind to dust without remainder
Enemy hordes that think and act perversely
Towards the teachings and lay and ordained people
With potent, accurate, powerful great vajra fire!

Especially, cause the saffron-clad community of Dungkar Monastery
Brightly beautiful in bonds of pure morality
To soar the path of immortal liberation
On unified wings of Sutra and Tantra!

In brief, we enthrone you, O Deity, as the supreme
Collected nature of all Gurus and Protective Deities!
From densely gathered clouds of the four activities
Pour down a cool rain of the two siddhis!

This, A Propitiation of Mighty Gyalchen Dorje Shugden, Protector of Conqueror Manjusri Tsongkhapa’s Teachings, entitled Melody of the Unceasing Vajra ’s composition was urged, not only by the vajra prophecy of the great emanated Dharmapala himself, but also on behalf of the general community by the master of the Dungkar Dratsang and all of its officers, with offerings. Accordingly, the one called Holder Of The White Lotus, Bearer of the Buddhadharma, Ngawang Losang Tenzin Gyatso Sisum Wangyur Tsungpa Mepa De (14th Dalai Lama) composed it at Dungkar Monastery with spontaneous auspiciousness.

All benefit and bliss! Siddhi Rastu

Domo Geshe Rinpoche, at whose Dunkar Monastery His Holiness composed these inspiring verses, was one of the greatest Mahasiddhas in Tibetan history. A greater example of saintliness and, mind you, non-sectarian compassion would be hard to find. Kyabje Trijang Dorje Chang said of him, “We are exactly the same”, and Domo Geshe put his Monasteries in Kyabje Trijang Rinpoche’s care before he passed on. The 13th Dalai Lama praised him as Je Tsongkhapa incarnate. Both the 13th and the 14th Dalai Lama praised Dungkar Monastery’s oracle, through which they obtained very valuable advice in difficult times.

This prayer shows beyond the shadow of a doubt the enlightened origin and the “holy mind” of the King Protector as seen by His Holiness. No “ghost” can come from Tushita and Kechara, Maitreya and Vajrayogini’s pureland. No “ghost” can cause you to “soar the path of immortal liberation on unified wings of Sutra and Tantra”!

(Extracted from the internet) 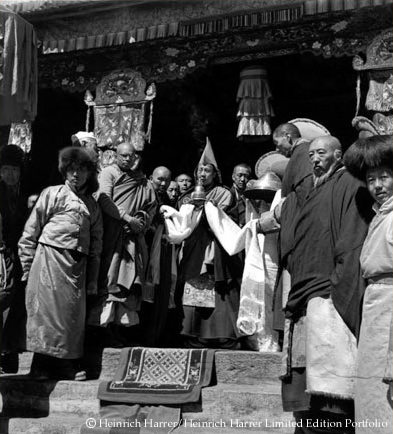 This is the last picture of the His Holiness the 14th Dalai Lama taken in Tibet prior to the cultural revolution. The year was 1951, His Holiness Dalai Lama was at Dungkar Gonpa (Dungkar Monastery), in the Chumbi Valley near the southern Tibetan border with Sikkim and Bhutan, poised for a possible flight to India.

Surrounded by many of his entourage and the Kalon who fled with him, His Holiness blesses a golden urn containing sacred relics of Gautama Buddha, which the Maha Bodhi Society of Sri Lanka has brought for him to sanctify. It was here at Dungkar Monastery of Domo Geshe Rinpoche’s, His Holiness Dalai Lama composed the prayer to Dorje Shugden.

(Extracted from the internet) 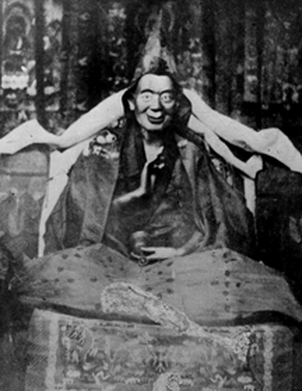 After Domo Geshe Rinpoche Ngawang Kalsang passed away in 1936, the Dungkar Monastery’s administration requested the central Tibetan government for permission to embalm his body. Although only the bodies of the Dalai Lamas and the Panchen Lamas were customarily embalmed and sealed in large stupas, the request was granted. The Regent Reting Rinpoche’s decree read, “In Southern Tibet, including Sikkim, etc., Domo Geshe Rinpoche’s activities were exactly like those of Je Tsong Khapa. In accordance, we will allow Rinpoche’s body to be preserved.” The holy stupa was consecrated in 1938 by Kyabje Trijang Rinpoche Dorje Chang and remained an object of veneration until it, along with the entire Dungkar Monastery, was destroyed in the Cultural Revolution. Under the direction of Domo Geshe Rinpoche the Dungkar Monastery became the seat of the famous and respected Dorje Shugden oracle that was consulted by people from all over Tibet. At the crossroads between India and Tibet, Dungkar Monastery also became known as a stopping place for most Tibetan and foreign dignitaries who were on their way to and from Lhasa. Thus, Dungkar Monastery was open to international contact in a way that was unusual for Tibet at that time.

When His Holiness the Thirteenth Dalai Lama returned from India in 1912 he stopped in Domo area, and a meeting took place between His Holiness and Domo Geshe Rinpoche at Kangyur Lhakang in Galingkang. One morning His Holiness mentioned to his attendants that he expected a very special visitor that afternoon. That day Domo Geshe Rinpoche, who always looked like a simple monk, brought special delicacies to offer to His Holiness and spent a long time in private talks with him. In the evening, His Holiness asked his attendants if they had seen the very special person who had visited him in the afternoon. They said that they had only seen a monk in tattered robes. His Holiness replied, “That is too bad. I saw Je Tsong Khapa himself.” 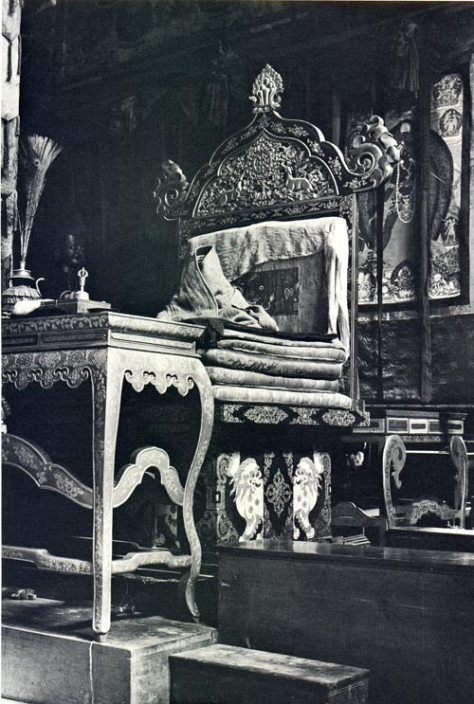 The throne of Domo Geshe Rinpoche in Dungkar Monastery. 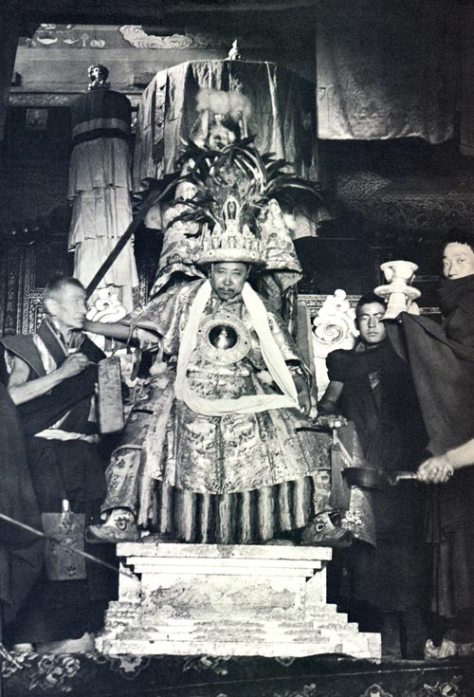 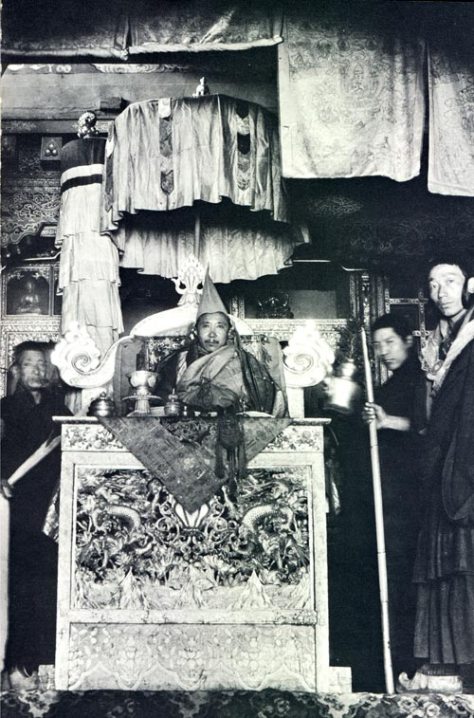 In this form of trance, Dorje Shugden can give extensive Dharma talks lasting many hours quoting from scriptures without looking at any texts, do extensive rituals and even confer initiation. Even if the oracle monk out of trance was not learned, but in trance of Shugden, it was completely different. The oracular prophecies of Dorje Shugden were highly sought after whether in the wrathful or peaceful forms. This oracle was specially blessed and created by Domo Geshe Rinpoche in Dungkar Monastery. 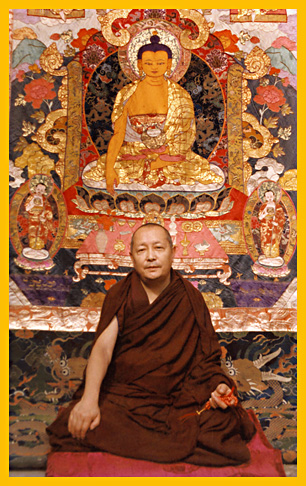 The 3rd and current incarnation of His Eminence Domo Geshe Rinpoche. This incarnation was both confirmed by the current Kyabje Trijang Rinpoche and Dorje Shugden oracle in trance. 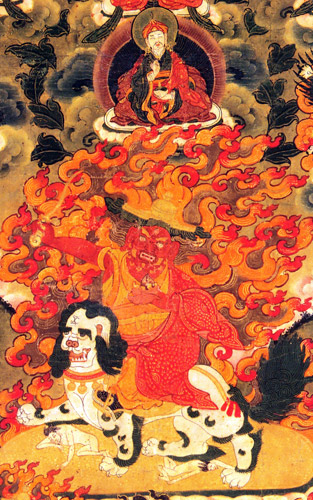 Here’s something extra, not only did the 14th Dalai Lama compose prayers to Dorje Shugden, but so did the Great 5th Dalai Lama! 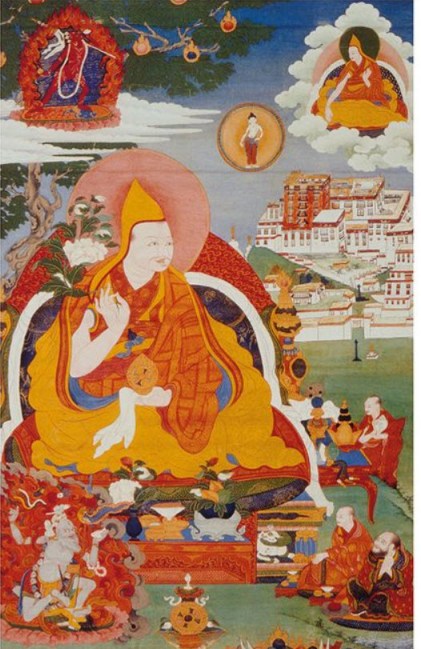 His Holiness the 5th Dalai Lama

Prayer by the 5th Dalai Lama to Gyelchen Dorje Shugden

Though unmoving from the sphere of primordial spontaneity,
With wrathful turbulent power, swifter than lightning,
Endowed with heroic courage to judge good and bad,
I invite you with faith, please come to this place!

Robes of a monk, crown adorned with rhinocerous leather hat,
Right hand holds ornate club, left holds a human heart,
Riding various mounts such as nagas and garudas,
Who subdues the mamo’s of the charnal grounds, praise to you!

Samaya substances, offerings and torma, outer, inner and secret,
Favorite visual offerings and various objects are arranged.
Although, previously, my wishes were a bit dense,
Do not stop your powerful apparitions, I reveal and confess!

Now respectfully praising with body, speech, and mind,
For us, the masters, disciples, benefactors and entourages,
Provide the good and avert the bad!
Bring increase like the waxing moon in spiritual and temporal realms!

Moreover, swiftly accomplishing all wishes,
According to our prayers, bestow the supreme effortlessly!
And like the jewel that bestows all wishes,
Always protect us with the Three Jewels!

Even the composition of this short praise and propitiation brought benefit. Thus, although undisputed great Tantric masters tried to subdue him by burning him in the fire through their rituals, his display of miraculous power only grew greater. (from ‘Music Delighting the Oceans of Protectors’, page 105).

His Holiness the 5th Dalai Lama wrote this propitiation after realizing that Dorje Shugden was not a harmful spirit, as he had first assumed because of the disturbing appearances that manifested after Tulku Drakpa Gyaltsen’s death.

As Kyabje Trijang Dorje Chang explains, such displays as that of trying unsuccessfully to subdue the Dharmapala, serve to bring out the greatness in both the Dalai Lama and Dorje Shugden who, in the process, showed his having mastered Guhyasamaja’s two stages, amongst other signs.

The Great Fifth not only wrote this prayer, but even crafted a famous and still-existing statue of Dorje Shugden with his own hands. 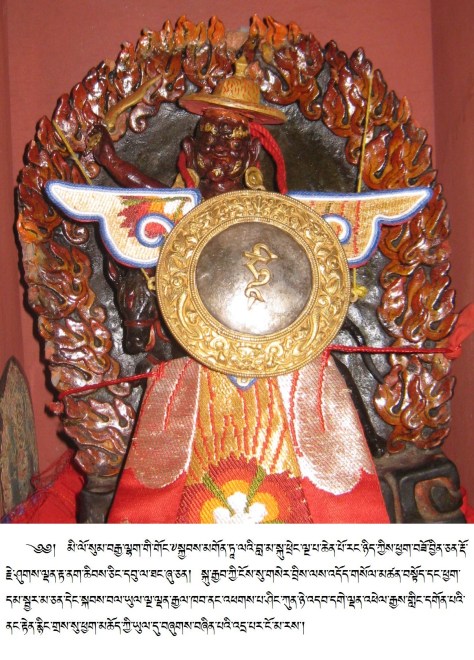 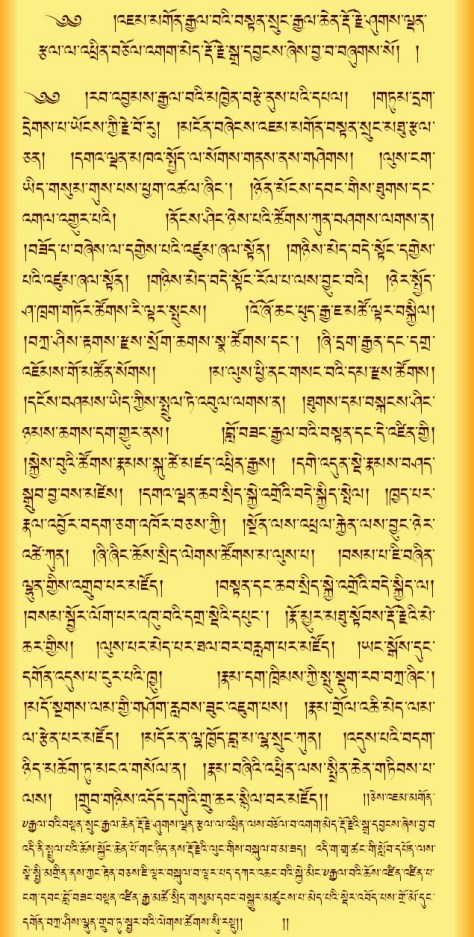 Prayer to Dorje Shugden in Tibetan by the 14th Dalai Lama. 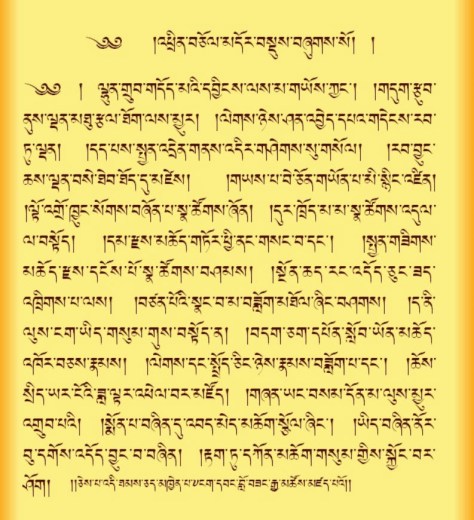 Prayer to Dorje Shugden in Tibetan by the 5th Dalai Lama.