I just completed watching a incredibly inspiring documentary on the hermit monks/nuns in Zhongnan Mountains of modern day China called “Amongst White Clouds” by *Edward A. Burger-a 2005 film. Buddhism has been very strong for thousands of years in China and I thought perhaps during the Cultural Revolution coupled with the onslaught of materialism overtaking China today, ascetic Buddhist practice may not be strong anymore. I was wrong. It was incredible to come across this moving and well made film.

It is reported with great reverence within the deep Zhongnan Mountain valleys live more than 5,000 Buddhist hermit monks and nuns today. They live off the land, spend most of their time in meditation and do not intermingle with the secular world. They live simply in the mountains and all their energy is focused on gaining deeper insights according to the teachings of the Buddha. Related to this video is Mr. Bill Porter and his works. His book inspired Edward A. Burger to create this beautiful documentary. I really loved this documentary and will watch many times again in the future repeatedly. I have also ordered the video online to get a copy I can carry with me wherever. I have ordered Bill Porter’s (Red Pine or Chinese: 赤松) book “Road to Heaven” also and looking forward to reading very much.   I must thank Mr. Bill Porter and Mr. Edward A. Burger for their contributions to our understanding of the profound path of Zen, China’s spiritual culture and introducing us to the incredible  modern day masters of Zhongnang Mountain.

Well you please read on so you can understand, learn and be inspired. 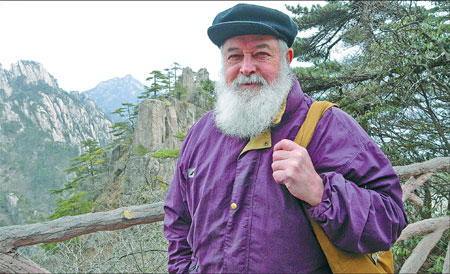 American writer and translator **Bill Porter says he could have been Chinese in his last life.”Perhaps I was an ancient Chinese,” the 69-year-old quips, because when he first learned Chinese in the late 1960s, he found vernacular Chinese quite difficult, while classical Chinese was easier.

He is recognized as an authority on Chinese religious culture not only among Westerners, but among Chinese as well.

Porter has published three cultural travelogues about China. He has also translated a dozen Chinese classics on Buddhism, Taoism and poetry as well, under the pseudonym Red Pine.

His most recent offering, Yellow River Odyssey, recounts his three-month expedition in 1991, from the mouth of the river, which is known as the “cradle of Chinese civilization”, in Dongying, Shandong province, to its source in Qinghai province. The book will be available in English in the latter half of this year.

“Two decades later, I still recall in my dreams how I listened to the roaring of the river and how I could hardly breathe at the river source,” he says.

Porter’s connection with China started when he was enrolled in the PhD program in anthropology at Columbia University.

He half-heartedly chose Chinese as his major to get a language fellowship.

He had always tried to understand life but he says it wasn’t until he read Alan Watts’ The Way of Zen that he finally made sense of it.

“When I encountered Buddhism, I didn’t have any problem understanding exactly what it was talking about,” he says. Porter then started meditating on weekends with a Chinese Buddhist monk.

His pursuit of Buddhism took him to Taiwan in 1972, where he stayed for a year at the Fo Guang Shan Monastery with master Hsing Yun.

Then he landed at the Chinese Culture University as a student in philosophy, and met his Chinese wife there.

It was then that he adopted “Red Pine” as his Chinese name, only to discover later it was also the name of a famous ancient Taoist.

To support his family after he married, Porter worked for six years at a radio station in Taipei as a news editor.

He began to wonder if Buddhist hermits still survived in the Chinese mainland in 1989, but didn’t have the money to embark on the exploration.

By chance, he had an interview with Winston Wong, son of Wong Yung-ching, one of the richest men in Taiwan. Wong was fascinated by his idea and financed his trip.

Porter traveled to Zhongnan Mountain in Shaanxi province and discovered that the hermit tradition was still very much alive, as dozens of monks and nuns continued to lead solitary lives in quiet contemplation, deep in the mountains.

He recorded his visits and interviews in Road to Heaven: Encounters with Chinese Hermits. The book is considered a window on – and has helped revive interest in – the phenomenon of Chinese hermits.

Former literary editor Zhang Jianfeng decided to search for hermits in Zhongnan Mountain himself, after reading Porter’s book in 2008. The 35-year-old has visited more than 600 hermits to date and became chief editor of a magazine dedicated to promoting traditional Chinese culture.

Porter returned to the United States in 1993, settling in Port Townsend, a coastal town of about 8,000 residents.

Since 2001, he has organized biannual trips to China for American tourists, who find out about him through word of mouth.

He is planning a trip in October to search for the residences and tombs of 20 Chinese poets.

Very inspiring documentary movie here. You must be in a quiet place and focus so you miss nothing. Some of the subtitle texts disappear too fast, but there is enough to understand what is happening. Enjoy and be inspired:

Or view the video on the server at: http://video.tsemtulku.com/videos/Amongst_White_Clouds.flv 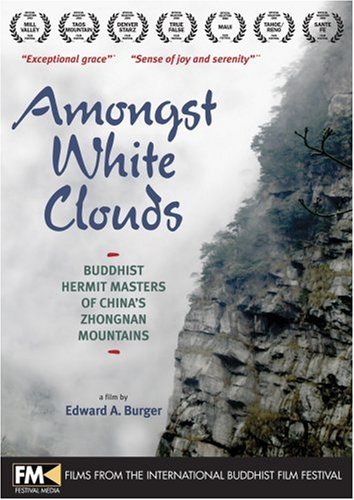 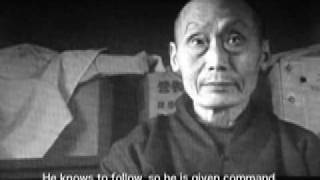 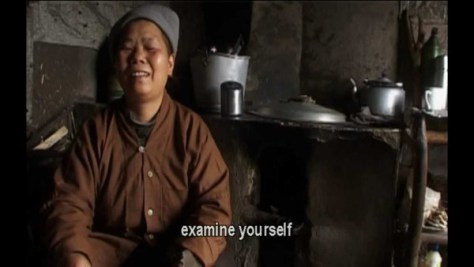 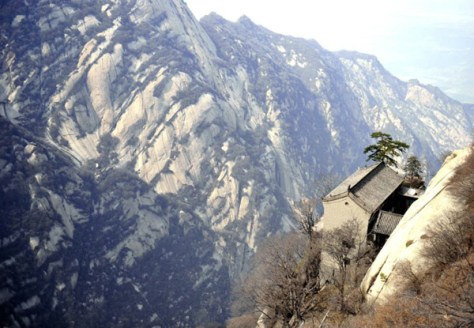 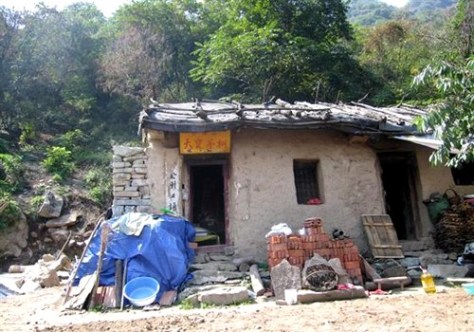 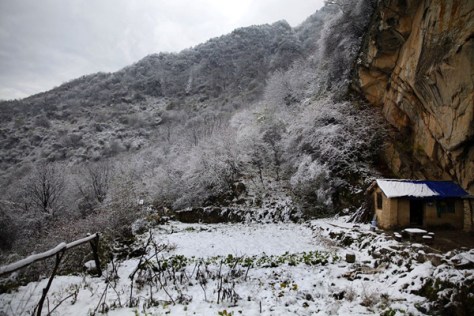 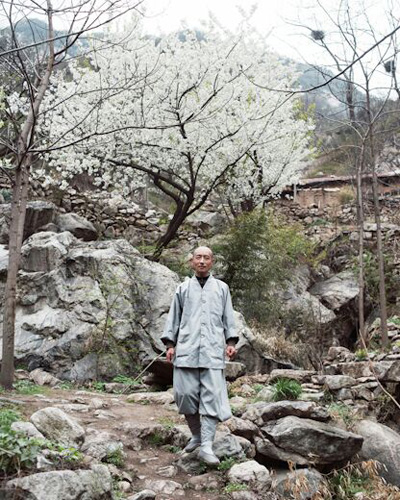 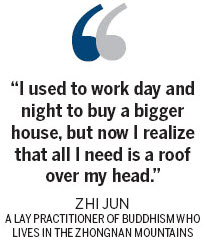 “I’ve lived on old mountains so many years, following the way of forests and springs, no one will visit, just clouds floating by, grass for a bed, blue sky for a quilt, happy with a rock for a pillow, let the world go about its changes.”~Hanshan, Tang Dynasty monk and poet 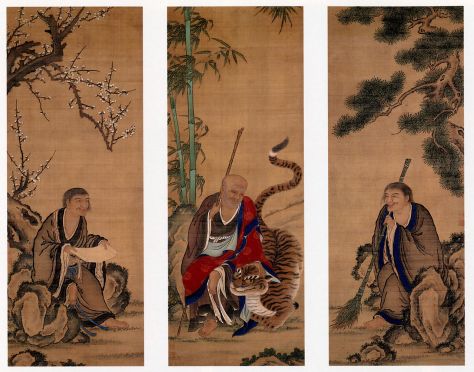 Hanshan (Chinese: 寒山; pinyin: Hánshān; literally: “Cold Mountain”, fl. 9th century) was a legendary figure associated with a collection of poems from the Chinese Tang Dynasty in the Taoist and Chan tradition. No one knows who he was, or when he lived and died. In the Buddhist tradition, Hanshan and his sidekick Shide are honored as emanations of the bodhisattvas Mañjuśrī and Samantabhadra, respectively. In Japanese and Chinese paintings, Hanshan is often depicted together with Shide or with Fenggan, another monk with legendary attributes.

*[American director Edward A. Burger takes us on his unforgettable journey into the hidden lives of China’s forgotten Zen Buddhist hermit tradition.

Amongst White Clouds is a look at the lives of zealot students, gaunt ascetics and wise masters living in isolated hermitages dotting the peaks and valleys of China’s Zhongnan Mountain range. The Zhongnan Mountains have been home to recluses since the time of the Yellow Emperor, some five thousand years ago.

Many of China’s most realized Buddhist masters attained enlightenment in this very range! And now? It is widely thought that this tradition was all but wiped out by the twists and turns of history. Amongst White Clouds shows us this is not the case.

One of only a few foreigners to have lived and studied with these hidden sages, Burger reveals to us their tradition, their wisdom, and the hardship and joy of their everyday lives.

With both humor and compassion, these inspiring and warm-hearted characters challenge us to join them in an exploration of our own suffering and enlightenment in this modern world. (Excerpt from amongstclouds.com)]

Or view the video on the server at: http://video.tsemtulku.com/videos/Red_Pine_Bill_Porter.flv

**Other works by Bill Porter from Wikipedia