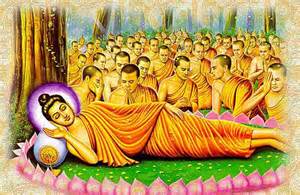 There is no such thing as a dead person, only a dead body.  My consciousness, which came from a past life, remains in my present life and will travel through to my future life, without identity, unless I am a highly developed practitioner, without memory.  Identity does not exist without the points of reference of time, label, or name and events.  Since identity keeps changing, who I am, or might have been, doesn’t matter really.

The moment I am separated from the physical body, what we call “me”, the object to which I point my finger is no longer me.  It is separated from me; it becomes my dead body.  Until that time, my body is most precious to me.  I maintain it, look after it and even a tiny little paid is unbearable.

Consciousness move out because the body has become unserviceable.  Then Bardo leads to reincarnation.  It is like a transfer, or station where you catch the next train.

When we die. how do we transit from this life to the bardo and from the to our next reincarnation?  What is travelling?  What really travels is a very subtle continuation of us, some kind of very subtle mine. a subtle energy like air.  We cannot see it physically, cannot catch any shape or light or form, not even energy.  It’s too subtle to grasp, far more suble than atoms and neutros.  It cannot be measured for the time being.

What continues had gone beyound positive and negative identification.  The dying mind is neutral and is too subtle to be either virtuous or  non-virtuous.  That’s what leaves the body, and, sooner or late, in its next life, it reverses the process of disconnecting that happened in the dying stage.  It reverses it and the consciousness then begins to take on a new form, awareness and finally, an identity, too.

The karma or pattern of action you create becomes an imprint which travels with you.  The imprint is like a life-sized image that shrinks and becomes a tiny trace.  It is even more subtle than memory and is not visible.  It is stored and surfaces when the conditions are right.

During the bardo, people take on the appearances they will have as mature adults in their next life.  But, at this point, they don’t have physical bodies.  These beings can see each other, but we can’t see them, because we have a physical body.  That’s where the curtain is drawn.

The nature of the bardo is such that you are not restricted in your movements.  You still have a body, but it is a mind-body, so there are no limitations of movements.  You go wherever your thoughts send you and it can be a wild ride..  Aside from exceptional cases, people can’t see or hear you.  You have lost the capacity to communicate in the way a human being is used to doing.

Sometimes, the bardowas, the people in the bardo, think they are still alive.  They don’t know they have died.  They may see their friends or loved ones crying and screaming and they might approach to console them. “Hey, don’t dry, don’t cry.  Why are your crying?”  But they won’t get any response and that might upset them.  They may come to sit in their usual place at the dining table, but they may find someone else there.  They won’t be served any food and will wonder, “What did I do?  Why are they ignoring me?” The bardowa is sensitive and life in the bardo is fragile.  Each one of those little upsets could kill them and push them into another life in the bardo.  These are the bardo’s sufferings.

Not everyone will have a prolonged bardo.  Some have a very short bardo; some will repeat the bardo seven times.  The maximum lifespan of a bardowa is seven days.  Each death is called a small death.  The maximum time a person can remain in the bardo is forty-nine days.  After forth-nine days, the bardowa takes rebirth.

This is one possible death.  Then there are two others, according to tradition, that result from positive karma or actions of body and mind.  In one you are received by winderful beings who show you to a pure land.  In the other, there may not be anyone to greet you, but you will feel like a child returning home.

Most of us don’t remember what happens between lives or who we were in another life, but great practitioners do retain some memories of their experiences and have reported them.  There are eighteen volumes of return-from-death stories that give detailed account of the bardo and rebirth.